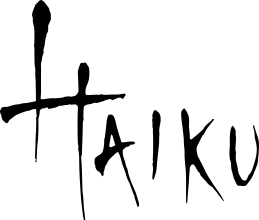 This was my first published haiku in Blithe Spirit (The Journal of the British Haiku Society) in 2017. I 'discovered' haiku over twenty years ago when I picked up The Haiku Hundred in a shop in Edinburgh. I read it with interest and occasional amusement, but without much appreciation and took little further interest. But I must have shown some interest in haiku as my wife bought me Haiku Poetry Ancient & Modern a few years later, after we had moved to Hull. It was here that I learned that haiku traditionally follow a format of seventeen syllables in three lines and I 'dabbled' with a few ideas. It is as well that these are all lost now - they were terrible and I was simply trying to be amusing; the 'spirit' of haiku had not been acquired. Like many things I start I gave up, my mind swamped by work and academic writing. 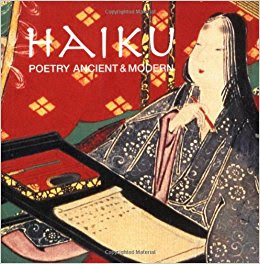 Almost twenty years on something happened and I have no idea what or, specifically, where except that it was on a plane. I think I read something about haiku - a genre of poetry I had barely heard about or thought about in years and immediately started to think and to see things about me in seventeen syllables. A quick Google and I learned for the first time - although it had been explained in the preamble to Haiku Poetry Ancient & Modern that there was more to the genre than seventeen syllables; there was also a 5:7:5 arrangement. This added to the challenge but I began to arrange the 'poems' I was writing in this way and then to break these down so that they scanned and the breaks in the lines made some sense. Looking back, some of these were terrible and not haiku at all - just doggerel - but it was keeping me amused on long-haul flights and long, lonely stays in foreign countries and it helped me to reflect on my time there. I decided not to be shy about this and created this Haiku blog and started posting my haiku; I am glad to say that many of these have been deleted. I also evolved the blog such that all haiku are lower case, have no titles and have no pictures related to them. There are different views on this; I think a haiku should stand-alone, but I may change my mind.

Back home after one journey I dug out The Haiku Hundred and Haiku Poetry Ancient & Modern and packed them for my next long-haul. I read all of the haiku contained in them again and it had not struck me, until this reading, that they were not all in the 5:7:5 format. I was having fun with that format and already - in my usual arrogance - considered myself a 'traditionalist'. Looking more closely at The Haiku Hundred I noted that there was a British Haiku Society and checked it out online. I immediately joined and received the most recent issues of Blithe Spirit and a newsletter and my eyes were really opened to the spririt of haiku. Many of the haiku were brilliant: moving; amusing; inspiring, and the essays were helpful in leading me away from the constraints of the 5:7:5 format and to experiment with shorter pieces and also to begin writing haiku that seemed more like haiku. In Blithe Spirit I also discovered other related forms of poetry: tanka; haibun and senryu (in fact, most 'haiku' are senryu - and mine are certainly mostly senryu). I also learned that haiku - strictly speaking - have the specific characteristics of a word indicating the season (a 'kigo') and a cutting word (a 'kireji') which breaks the haiku into two parts. I had seen frogs - one of my favourite animals - referred to frequently in haiku and had wondered why until I learned that this indicates spring. The frog features in the most famous haiku by the acknowledged founder and foremost expert in the genre, Basho:

This haiku exists in many translations; above is my favourite and a very common one. It is short and clear. The kigo word is obvious; I still have to be clear where the kireji is in every haiku and I am not always sure but I think in the above it is 'splash'. In Blithe Spirit haiku and senryu are presented together with no distinction and, likewise, in frogpond, the Journal of the Haiku Society of America, which I also joined.

One thing I have found very useful is sharing haiku and my Burmese friend - living in Singapore - Su Wai Hlaing has been very enthusiastic and helpful. She started by responding in kind to my early 5:7:5 'haiku' and then as we discovered more about haiku we began to adapt our styles. We have also been experimenting with renku and tanka. At the moment I think we need to improve our haiku! The cross-cultural and cross-religious aspect here has been intersting and helpful: Su Wai is Buddhist and I am a Roman Catholic. Of course, haiku has its roots in Zen Buddhism and I have to be clear, in my own mind, where I stand. My interest in Buddhism has certainly increased but my own faith has not changed. Haiku is for everyone.

Finally, I have enjoyed finding more resoures to read and where haiku can be shared such as the Facebook pages for The British Haiku Society and Sharing Haiku Knowledge. There is also, based in the United States, The Haiku Foundation who have a fun app THF Haiku where you can read haiku at random and from whom you can receive blog postings. They also offer a lot of free content such as books to be downloaded. I am building up my own library of haiku books but I will not list these as I think that would deprive you of the fun of discovering them yourself. However, I have created a Haiku resources page and here are the links to my published haiku: 'watch hands'; 'rising river steam'; 'the ploughman'. And some haiku sequences on SoundCloud: 'haiku poetry by Roger Watson'.